Read the full story at TruthDig

Two decades ago I was the investigator for the legal team that sold you the bullshit that a drunken captain was the principal cause of the Exxon Valdez disaster, the oil tanker crackup that poisoned over a thousand miles of Alaska’s coastline 25 years ago today, on March 24, 1989.

The truth is far uglier, and the real culprit – British Petroleum, now BP – got away without a scratch to its reputation or to its pocketbook.

Just this month, the Obama administration authorized BP to return to drilling in the Gulf.
It would be worth the time of our ever-trusting regulators to take a look at my Exxon Valdez files on BP.  They would see a decades-long pattern of BP’s lies, bribes and cover-ups that led, inexorably, to the Deepwater Horizon blowout – and that continue today within BP’s worldwide oil operations.
Here’s a sample:

Palast’s investigation of BP opens his latest film, “Vultures and Vote Rustlers.” Pre-release editions are available on DVD and download for a donation to Palast’s foundation for investigative reporting.

And read the complete untold story of the Exxon Valdez and Deepwater Horizon disasters in Palast’s “Vultures’ Picnic,” BBC Newsnight’s Culture Program’s Book of the Year.

Fraud No. 1: The Emergency Sucker Boat fraud
As the principal owner of the Alaska Pipeline and Terminal, BP, not Exxon, was designated by law to prevent oil spilled by the Exxon Valdez from hitting the beach. It was BP’s disastrous failures, more than Exxon’s, that allowed the oil to devastate Alaska’s coast.
Containing an oil spill – preventing spilled crude from spreading to the shore – is not rocket science.  All you need are rubbers and suckers. It works like this:
If a tanker, oil rig or pipe bursts open, you surround it with a giant rubber skirt known as “boom.” Then you suck the oil out through vacuum hoses on board special “containment” or “skimmer” ships.
The containment ship is the firetruck of oil spills. You simply don’t let tankers out of port unless a containment ship is ready to roll. It’s against the law.
But the law has never meant much to BP.
In May 1977, as the first tankers left Valdez, BP executives promised the state of Alaska that no tanker would leave port unless there were two containment barges at the ready and loaded with boom, with one placed near Bligh Island. 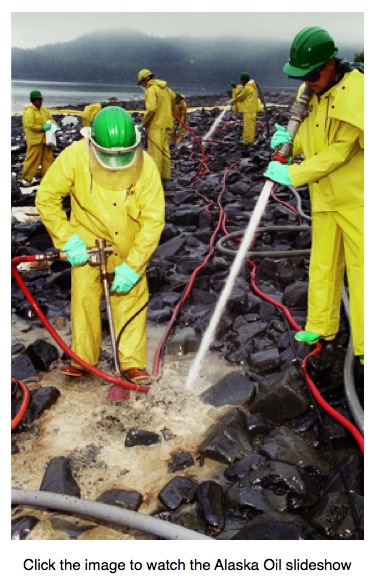 In fact, on March 24, 1989, when the Exxon Valdez ran aground, right at Bligh Island, the containment barge was far away in Valdez, locked in a dry dock, its boom and hoses under Alaskan ice. As a result, by the time the emergency oil spill vessel got to the stricken ship, the oil slick was a hundred miles in circumference and beyond control.
Two decades later, I watched fireboats uselessly spraying the burning oil on the Deepwater Horizon. Once again there were no BP skimmer barges, no boom surrounding the rig. Just as in Alaska, the promised spill containment operation was a con.
Fraud No. 2: Ghost Crews
There’s no sense having a fire truck without firemen. And so, years before the Exxon Valdez grounding, Alyeska, the oil company consortium headed by BP, promised the U.S. Department of the Interior and the U.S. Congress, under oath, that the oil shipper would employ a trained and equipped crew around the clock to jump from helicopters, if needed, to contain an oil spill. My clients, the Chugach Natives of Alaska, agreed to give up ownership of the land under the Port of Valdez to the oil companies in return for those jobs.
The night the Exxon Valdez grounded, Chugach Natives watched from the beach at nearby Tatitlek Village as the tanker headed into the reef. They could have prevented the disaster””but they were helpless: BP had fired them.
To save money, BP’s Alyeska simply drew up lists of nonexistent emergency spill response workers: an imaginary crew to man phantom emergency ships.
Fraud No. 3: Phantom Equipment
And the rubber boom? That was a phantom as well. BP’s Alyeska had promised that too, in writing. The equipment was supposed to be placed along the tanker route including Bligh Island – exactly the spot where the Exxon Valdez grounded.
And so, it was no surprise to me that 21 years later in the Gulf there were neither skimmers nor boom at the site of the Deepwater Horizon.
Cover-Up and Threats
Did BP’s top executives and partners know of the ghost response teams and phantom equipment ruse? Yes, we have the documents and insiders’ testimony. Just two examples from my bulging file cabinet:
In a confidential letter dated April 19, 1984, Capt. James Woodle, BP’s commander of the port at Valdez, warned that “due to a reduction in manning, age of equipment, limited training and lack of personnel, serious doubt exists that [we] would be able to contain and clean up effectively a medium or large size oil spill.”
In response, BP threatened the captain with a file on his marital infidelities (fabricated), fired him, then forced him to destroy his files. (I’ve got the letter – can’t tell you how.  Click here.)
In September 1984, before the Exxon Valdez disaster, BP’s shipping broker, Charles Hamel, was so concerned at what he saw as an immediate danger in Alaska that he flew by Concorde to London to warn BP’s chiefs of the looming emergency. In response, BP hired ex-CIA operatives to tap Hamel’s phone and intercept his mail. BP’s black ops team even ran a toy truck with a microphone into the air vents of a building where he was speaking with a congressman. (Ultimately, BP’s spooks were captured by a team of Navy SEALs.)
BP Gets Off Cheap
The team of attorneys representing the Natives and fishermen whose lives were destroyed by the tanker spill chose to hold back the true and ugly story of systematic fraud and penny-pinching negligence by BP and its partners. We focused instead on the simpler story of human frailty and error -“drunken skipper hits reef.”
We didn’t have a choice: Oil company chiefs had told our clients – Natives who were out of cash, isolated and desperate – that they wouldn’t get a dime unless we agreed not to use the “f-word”: fraud.
And BP? Who said crime doesn’t pay? BP walked away with a nominal payment to Alaska’s Natives, fishermen and towns of $125 million – 100 percent of it covered by insurance.
The Oil is Still There
In 2010 for the U.K.’s Channel 4 Television, I returned to Alaska with filmmaker Richard Rowley. In the quiet rivulets of the islands within Prince William Sound, we kicked over some stones – and the place, two decades after the spill, smelled like a filthy gas station.
Maybe it’s time for the Obama Administration, eager to welcome BP back to plunder the Gulf, to wake up and smell the crude.
* * * * * *
Greg Palast investigated fraud charges against Exxon and BP in the grounding of the Exxon Valdez for the Chugach Natives of Alaska, owners of the shoreline. He has continued to investigate BP and the oil industry for BBC TV and Channel 4 (UK) and The Guardian, expanded in his book, Vultures’ Picnic and the newly released film, Vultures and Vote Rustlers, available only from Palast’s not-for-profit foundation for investigative reporting.
Greg Palast is also the author of the New York Times bestsellers Billionaires & Ballot Bandits, The Best Democracy Money Can Buy and Armed Madhouse.
HELP US FOLLOW THE MONEY. Visit the Palast Investigative Fund’s store or simply make a tax-deductible contribution to keep our work alive!
Subscribe to Palast’s Newsletter and podcasts.
Follow Palast on Facebook and Twitter.
www.GregPalast.com