BP In Deep Water:
The Making Of the Channel 4 Investigation 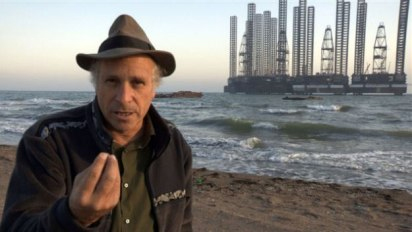 For two decades, investigator Greg Palast has been on BP’s trail. In BP: In Deep Water, Palast takes Dispatches viewers along on his world-wide investigation of the oil giant. (Sorry, UK only).
One year after BP’s Deepwater Horizon rig blew apart and spewed 170 million gallons of oil into the Gulf of Mexico, BP claims victory – that most of the oil is gone.
Palast walks across one still-slimed beach with a marine biologist who describes ‘BP’s clean up theatre’ as ‘superficial’ and ‘cosmetic’. He shows us the oil still coming ashore, and the oil still deep beneath the beach surface.
From the Gulf, Palast flies to the Alaskan Arctic and discovers that BP has spilled over 200,000 gallons of oil. The problem: BP had not tested the integrity of pipeline for eight years. The reason? A prosecuting attorney said: ‘BP cut corners with disastrous consequences.’ Palast meets an insider In shadow, a man who programmed the type of testing equipment oil companies can use, called the PIG, says it can cost up to $1 million per mile to test pipes. BP’s failure to test could have saved it millions of dollars, but failure to check the pipeline was at the cost of poisoning the last pristine wilderness.
Palast, who years earlier led an investigation of the Exxon Valdez disaster reveals that, despite the name ‘Exxon’ on the tanker, it was a company called Alyeska, in which BP had a majority share, that was responsible for containing the oil spill. Their response was so slow that oil devastated 1,300 miles of Alaskan shores. The company failed to have the equipment and crews required to deal with the spill. Palast shows viewers the oil still on the beaches, 22 years after the spill.
Then, it’s a flight half-way across the planet to the police state of Azerbaijan, in Central Asia, where the Dispatches crew is detained by state security while attempting to film BP’s operations. Just after Azerbaijan’s ruling family took control after a coup, BP , with other oil companies, took the nation’s oil in a deal called the ‘Contract of the Century.’ Former MP, former BP political advisor and MI6 operative Harold Elletson tells Dispatches how the dictatorship made sure the deals with BP would ‘stick’.
Also saying he helped to make BP’s position ‘stick’ was the oil company’s one-time Deputy Representative in Azerbaijan who tells Dispatches that, to win favour from the petro-state, BP authorised his paying over $2 million in bribes.
And, while working for BP, that he was approached by MI6 to spy for Britain, providing military intelligence to Moscow station chief John Scarlett.
About Greg Palast
A fraud investigator turned journalist, Palast is best known in the US for his discovery of how Katherine Harris fixed the Presidential election of 2000 for George W Bush and, in the UK, for his Observer investigation, ‘Lobbygate: Cash for Access’ about New Labour and lobbyist influence. Palast investigated the Exxon Valdez grounding for the Natives of Alaska, owners of the state’s coastline; and for the government, directed investigations of fraud in the energy industry.
********
Palast’s investigations are supported in part by the Puffin and Cloud Mountain Foundations and the Palast Investigative Fund, a 501c3 charitable trust.
Subscribe to Palast’s Newsletter and podcasts.
Follow Palast on Facebook and Twitter.
www.GregPalast.com