BP and the Three Stooges Defense

Forget Stephen King. If you want scary, read U.S. District Judge Carl Barbier’s 150-page Findings of Fact released Thursday in the Deepwater Horizon case.
Although the judge found BP liable for “gross negligence,” some U.S. media failed to mention that Barbier let BP off the hook on punitive damages. And that stuns me, given that the record seems to identify enough smoking guns to roast a sizable pig.
Here’s a standout example:
Every rig operator knows that, before a rig can unhook from a drill pipe, the operator has to run a “negative pressure test” to make sure the cement has properly sealed the drill pipe. If the pipe is safely plugged, the pressure gauge will read zero. The amount of pressure BP measured at 5 p.m. on April 20, 2010, the day of the explosion? 1400 psi (see the findings, pages 62-65).
1400 psi is not zero. Stick a balloon in your mouth with zero pressure and nothing happens except that you look silly. Replace the balloon with a hose delivering a 1400 psi blast and it’ll blow your skull apart. 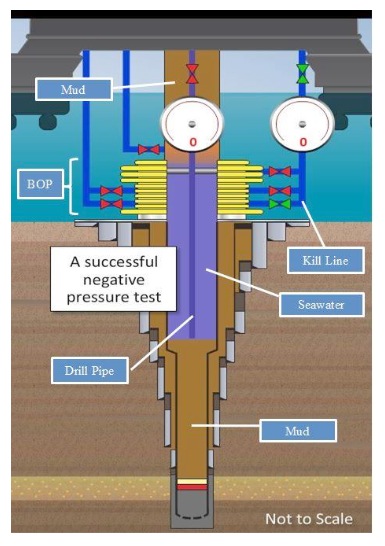 So, how could the company record zero? Answer: BP’s crew re-ran the test measuring the pressure in something called the “kill line,” which is definitely not the drill pipe.
By reporting that the pipe had no pressure and all was safe, BP could begin to unhook the Deepwater Horizon from the pipe – and sail away. Why would BP do that? In my view, there were three motives: money, money and money. It costs BP a good half million dollars each extra day the rig stays on top of the drill hole. It seems that BP wanted the rig gone and quickly.
So, instead of halting the disconnection process, BP appears to have lied and recorded the pressure reading as “zero.” The rig’s owner, Transocean of Switzerland, went along with BP’s actions.
So how did BP get away with mere “gross negligence” as opposed to the more serious claim of fraud? Because the court found that the blowout, explosion, fire and oil spill were caused by “misinterpretation of the negative pressure test.”
Misinterpretation? If a woman says “thanks” when you say she’s dressed nicely and you think she wants a kiss, that’s “misinterpretation.” But on the Deepwater Horizon, the drill pipe gauge read 1400 psi and BP picked a different pipe that gave the company the magic zero. That’s not, I contend, “misinterpretation.”
Maybe the judge thought he was pretty tough by calling out BP for “gross” negligence (rather than plain-vanilla negligence, the finding against Transocean and contractor Halliburton). But, in fact, it seems Barbier fell for the Three Stooges defense.

Get the “eye-opening, heart-pumping, mind-blowing experience that should not, MUST not, be missed” (Nomi Prins):  Palast’s hunt of BP and the petroleum pirates, Vultures’ Picnic, BBC-TV “Book of the Year,” signed by Palast, for a tax-deductible donation to fund our work.  Includes the videos that go with the book.

Throughout the 150-page decision, the judge cites one instance after another of bone-headed, buffoonish, slapstick decisions, and plenty of pratfalls and banana-peel slips by BP, Transocean and Halliburton. You have to wonder how these schmucks even found their drill hole. It was a corporate Larry-Moe-and-Curly-Joe routine that would provide a lot of belly laughs if 11 men hadn’t died as a result.
I’ve seen the Three Stooges defense before in federal court. In 1988, the corporate owner and the builder of the Shoreham nuclear plant were on trial on accusations they bilked their New York customers out of $1.8 billion. In court, they pleaded stupidity and incompetence as a defense against deliberate deception. As the government’s investigator, I didn’t buy it – billion-dollar corporations can’t be that stupid – and neither did the jury. (The racketeering charges were settled after trial for $400 million.)
And here is a new set of Stooges: BP plays Larry, Transocean puts on Moe’s wig and Halliburton makes “Nyuk! Nyuk! Nyuk!” sounds like Curly Joe. Halliburton, the judge found, failed to test the final cement mix and BP bitched about it – [Halliburton engineer Jesse Gagliano] isn’t cutting it any more, reads an email between two BP managers on the rig – but BP went ahead and used the bad cement anyway (Findings, paragraphs 227-228)
When the pressure in the drill pipe read 1400 psi, BP and Transocean managers should have stopped the rig departure immediately. They didn’t. Nevertheless, other systems should have prevented a blowout. According to Barbier, other safety systems were jacked with to save a penny here, a penny there (or, a million here, a million there). Example: BP used leftover cement (Findings, paragraphs 209-211) that contained chemicals that destroyed the integrity of the new cement, because using the old stuff saved some serious cash.
And this leads to the question of punitive damages.
Barbier had the power to levy a fine big enough to make BP plc, BP America’s London-based parent corporation – a company with revenue of a quarter of a trillion dollars a year – go “ouch.” But to slam BP with a fine that would hurt, the judge needed to hear from the Justice Department about corporate-wide perfidy. He pointed out that the case would have to be made against BP plc, the international parent, if he were to level a fine that would punish the corporation.
Against BP there is evidence aplenty. For years BP has played fast and loose with safety – from Asia to Alaska.
Chasing BP across five continents, I’ve found that “gross negligence” could be BP’s corporate motto. In 2010, I was arrested in Azerbaijan hunting down evidence of another BP/Transocean offshore blowout that occurred 17 months before the Deepwater Horizon explosion. The cause of the Caspian blowout was the same as in the Gulf disaster: mishandling of “foamed” cement. Had BP not covered up the prior blowout off the coast of Azerbaijan, the deaths in the Gulf, I’m certain, would have been avoided.
Yet on this and other examples of BP’s transcontinental penny-pinching negligence, the Justice Department was silent.
The ugly truth is that the U.S. State Department knew of the Caspian disaster and kept its lips sealed. Our own government wasn’t going to admit that in the Deepwater Horizon trial.
Furthermore, the U.S. government can’t tag BP as an endemically rogue, dangerous operator without casting doubt on the administration’s recent grant to the corporation of new deep tracts to drill in the Gulf of Mexico.

This week, download for FREE, the latest compilation of Palast’s investigative films, Vultures and Vote Rustlers including, “BP: In Deep Water.” Made possible by a grant from Cloud Mountain Foundation.

So maybe it was not the judge but the public that was blinded by the government and media crowing about a possible $18 billion fine for gross negligence. Eighteen billion dollars may sound like a lot to us mere mortals, but to a trillion-dollar behemoth like BP, it is not a punishment, but a reasonably priced permit for plunder.
* * * * * *
Greg Palast is the author of the New York Times bestsellers Billionaires & Ballot Bandits, The Best Democracy Money Can Buy, Armed Madhouse and Vultures’ Picnic , a BBC Television Book of the Year.
Get a signed copy of Palast’s latest film Vultures and Vote Rustlers.
HELP US FOLLOW THE MONEY. Visit the Palast Investigative Fund’s store or simply make a tax-deductible contribution to keep our work alive!
Subscribe to Palast’s Newsletter and podcasts.
Follow Palast on Facebook and Twitter.
www.GregPalast.com