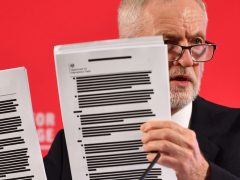 As my chief investigator, Leni Badpenny, a British subject, notes, Jeremy Corbyn’s line that Boris Johnson was entertaining the sale of the NHS, “is complete bollocks.”

Corbyn, like Joe McCarthy, is waving a “document,” but has never once shown us the page where Trump is demanding, or Johnson offering, the sale of any part of the NHS.

Rather, the document says that the US trade rep wants “total market access” for US drug companies, same as the total market access now granted German and French companies. This is about removing tariffs on drugs to cut NHS costs.

I’ve known both Jeremy (my own former MP) and Boris from years back.

And while I am far more aligned with Corbyn’s Left politics, this kind of flimflam underscores that Corbyn has zero integrity.

Indeed, Corbyn, who once praised my work against the globalist corporate marauders in control of the WTO and EU, has now reversed a lifetime of anti-EU stances to placate his yuppie Labour members. Have you no shame, sir?

This is no endorsement of my favorite clown, Mr. Johnson… but, for this investigative reporter, facts must count.