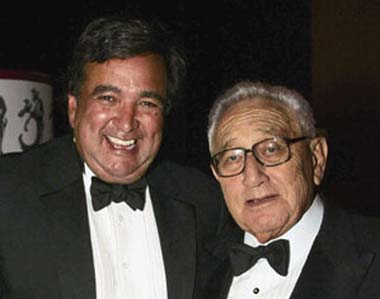 Bill Richardson is out: Caught with his hand, if not exactly in the cookie jar, at least you could say his sticky finger were near it. I’m not surprised.
For years I’ve been investigating the second-most corrupt state in the USA (after Alaska). I like to check in on the enchanted state with my bud Santiago Juarez.
I knew it was not a polite question, but it was really bugging me, so I asked HIM, “Exactly how does a Mexican get the name William Richardson?”
Governor Richardson’s dad, Santiago explained, was a Citibank executive assigned to Mexico City. There
he met Governor Bill’s mom, and – milagro! – a Mexican-American was born. Richardson gets big mileage out of his mother’s heritage, and that makes him, legitimately, a Mexican-American, a politically useful designation. But it’s just as legitimate to say that Richardson is a Citibank-American.
But Governor Richardson is more than that. Between leaving Bill Clinton’s cabinet where he was Secretary of Energy and grabbing a Hispanic-district seat in Congress, Richardson became a partner in (Henry) Kissinger and Associates. That would make Richardson a Kissinger-American as well.
IN 2004, John Kerry won New Mexico – if you counted the votes. But they didn’t – and George Bush won the state and the presidency by just 5,000 ballots.
Everyone was talking about the theft of Ohio by
Republicans, but few noted that New Mexico was stolen as well. But one fact drove me straight nuts: In the end, this state and its damaged elections were in the hands of Richardson, A Democrat and a Mexican-American one at that.
In New Mexico the issue of uncounted votes is more than skin deep. Lots of Mexican-American votes don’t tally, but Citibank-American votes never get lost. Kissinger American votes always count. The story of America’s failed elections is not about undervotes. It’s about underclass. Disenfranchisement is class warfare by other means. It just happens that in New Mexico, the colors of the underclass are, for the most part, brown and red.

Class War by Other Means
As community organizer Santiago told me:
You take away people’s health insurance and you take their right to union pay scales and you take away their pensions – taking away their vote’s just one more on the list.
Some New Mexico Democrats have no trouble at the voting booth. In Santa Fe, you and trust-fund refugees from Los Angeles wearing Navajo turquoise jewelry and “casual” clothes that cost more than my car. Each one has a personal healer, an unfinished film script and a tan so deep you’d think they’re bred for their leather. They’re Democrats and their votes count. Voting – or at least voting that gets tabulated – is a class privilege. The effect is racial and partisan, but the engine is economic.
The second – and third-highest undervotes in New Mexico were recorded in McKinley and Cibola counties””85% and 72% Hispanic and Native. But the undervote champ is nearly the whitest county in New Mexico: DeBaca, which mangled and lost 8.4% of ballots cast. White DeBaca, whose average income hovers at the national poverty level, is poorer than Hispanic Cibola. No question, disenfranchisement gives off an ugly racial smell, but income is the real predictor of vote loss.
And what about those Bernalillo ghost voters for Bush? Those spirits are, it turns out, quite well-to-do, haunting the mesas west of Albuquerque where the real estate provides unobstructed views of Georgia O’Keeffe sunsets.
This was my third investigation in New Mexico in twenty years. The first time, the state’s Attorney General brought me in to go over the account books of Public Service of New Mexico (PNM), a racketeering enterprise masquerading as an electric company. Too young to understand what I wasn’t supposed to know, I proudly mapped out the sewerage lines of deceit connecting the gas drillers, water lords and political elite of New Mexico. The AG’s office handed me a nice check – which I took not as a reward, but as a payment to leave the state. After a decade away, I returned as a reporter, to look into prisons-for-profit outfit Wackenhut Inc. In September 1999, a company insider told me, Wackenhut was cutting costs at its New Mexico jails by sending guards alone into the cell blocks. Ralph Garcia of Santa Rosa, who’d lost his ranch to drought, took the $7.95-an-hour job guarding homicidal neo-Nazis and Mexican mafia thugs in the local Wackenhut lock-up. Inexperienced, untrained and alone, he was stabbed to death by inmates just two weeks after the insider’s warning.
So that’s how Garcia became one more impoverished Chicano who lost his vote. No question, that’s not your typical case of voter disenfranchisement, but that’s the reality of the “Land of Enchantment.” New Mexico is the New America, where growing income inequality is creating a feudal divide between the prison-owning class and the prisoner-and-guard class.
Vote spoilage is the owning class’s weapon of choice.
Whose flag does Bill Richardson carry in the nouvelle class war? When I was checking out the New Mexico vote in 2005, my old friends Public Service of New Mexico hit the front page, sued by the State of California for conspiring with Enron to rig the California power market. It is still in court. It was a scam called “Ricochet.” Enron and PNM say it was not illegal. It played out about the time Garcia was walking the cell block. Where was Richardson? He was in Washington, Clinton’s Secretary of Energy, playing chubby cheerleader for PNM’s plan for “deregulation” of the energy market. Deregulation made PNM’s games possible””and Richardson’s employment by Kissinger inevitable.
Richardson, Ready for Takeoff
What about all those suspect spoiled votes in Hispanic and Indian precincts stuck inside the machines? Why didn’t this Mexican-American Democrat ask for a recount? It didn’t just slip Richardson’s little mind: He actively did everything in his power to stopa recount. I was told that it was Richardson himself who encouraged Secretary of State Vigil-Giron to reject the $114,000 payment from pissed-off Democrats and the Green Party. The Governor was too busy to speak with me about this.
Halting the 2004 recount wasn’t enough for Governor Bill, however. He demanded the legislature pass a “reform” law that would require anyone wanting a recount of a suspicious vote to put up a bond of over one million dollars. As a result, “free and fair elections” are now effectively outlawed in New Mexico. You can have a choice of a “free” election or a “fair” election, but not both. Want fair? Then you have to pay a million to recheck the ballots. In other words, it’s against the law to buy votes, but in New Mexico not against the law to buy the vote count.
On his phony reform law, Richardson was called out by a fellow Democrat, State Senator Linda Lopez – an act of indiscreet defiance that would not be forgotten by the Governor’s circle.
The centerpiece of the law signed by the Governor: Ms. Fox-Young’s proposal to require photo ID for new voters. Maybe the former Cabinet Secretary and United Nations Ambassador Richardson couldn’t imagine that photo IDs would be a problem for some voters. After all, Mexican-Americans in Little Texas may have trouble producing acceptable IDs, but it’s no problem at all for a Kissinger-American like Governor Richardson. The Governor and Jimmy Carter both have passports, they have credit cards and they have chauffeurs who will vouch for them.
Richardson wouldn’t speak with me about the 2004 vote fiasco. Instead, he busied himself with his space program. He announced the state would chip in $200 million to build a “spaceport” to land private rocket ships that will be launched beginning in 2009 by Richard Branson, the British billionaire. Passengers have already bought tickets for $200,000 each (round trip, they hope).
**************
Read the rest by picking up Greg Palast’s Armed Madhouse at Amazon.com or support his investigations buy getting an autographed copy of the book at www.PalastInvestigativeFund.org
Subscribe to Palast’s reports at www.GregPalast.com