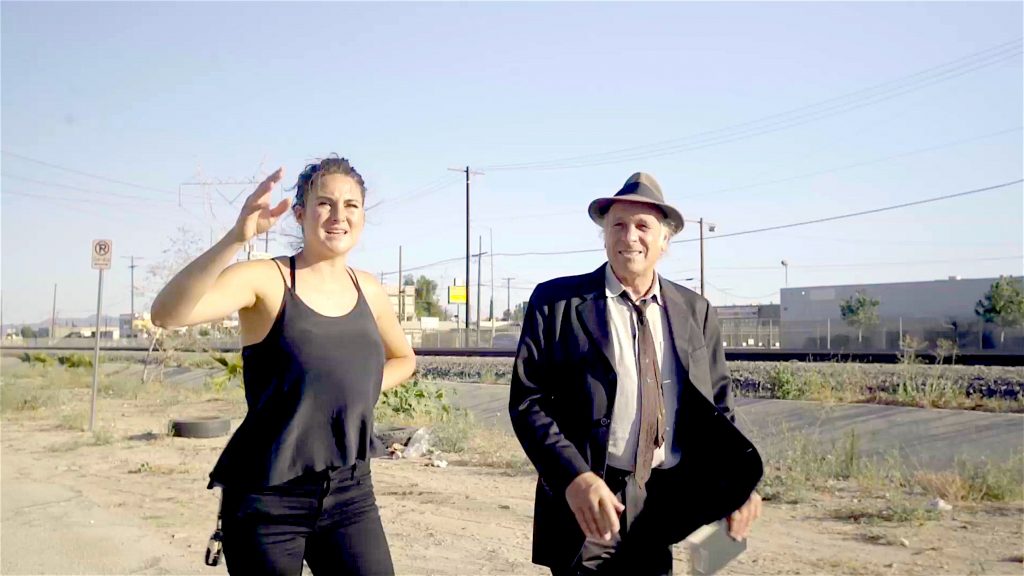 Shailene Woodley and Greg Palast in Palast’s new film The Best Democracy Money Can Buy
[July 26, Philadelphia]
Bernie’s campaign is just beginning. No kidding. The real campaign. The one he was chosen for.
I got this idea of what Bernie and Berners should do from Satan, from the Anti-Christ. Or, as you might know him from television, the Reverend Pat Robertson. That’s correct: the berzerko right wing televangelist – and one of the most brilliant men I’ve ever met.
Years ago, the Guardian asked me to investigate Rev. Pat’s diabolical plan to create the first web-only bank. (The goofy bank caper was foiled when The Guardian reported on his less-than-savory financial dealings that would likely disqualify him from getting a bank charter.)
When I visited The Reverend at his TV studio in Virginia Beach, I reminded him that, when he ran for President in 1988, he claimed that God himself had told him to run. My question: With a campaign manager like that, how come he lost?
Robertson’s answer: “The Lord did not tell me to win. He told me to run.”
As Robertson and his minions explained it, the race gave him a list of three million names, addresses, phone numbers – and millions in non-stop donations. From that list of believers and their bodies and checkbooks, Robertson created the fearsome Christian Coalition. And for two decades, no one could run for dogcatcher on the Republican line without the endorsement of Reverend Pat’s Christian Coalition.
If a diabolical voice called forth Pat Robertson, I’m certain the better angels of our nature called forth Bernie not for a political moment but to create a political movement.
Unless he’s been fooling us, Sanders himself has always said his campaign’s moral purpose was not to win the nomination (and surely he must have known the DNC couldn’t permit that), it was all about a revolution.
Now is the time to create that revolutionary movement that Sanders claimed, correctly, could be more powerful than a mere President.
It would be a terrible, terrible waste for the Sanders movement to make its goal some instantly forgotten lines in the Democratic Party platform. (Does anyone remember the 2012 Platform’s position on minimum wage?)
A Sanders permanent organization could turn American politics toward the sun. He could lead a real political revolution more important than winning the California primary.
I’d call it the Un-Christian Coalition-though I suspect there’s a better name out there.
I don’t, as a journalist, ever endorse candidates. But one can’t ignore the movement his candidacy has engendered. It would be a tragedy for our nation if this non-violent insurgency of young people simply floated away because of electoral politics du jour.
I am now in Philadelphia covering that hot bag of noxious political fossil fuel exhaust known as the Democratic Convention. I get to witness a circus of craven ambition and obnoxious marketing of candidates whose slogan is, let’s face it, “I’m not as evil as that other guy.”
In the union movement, we used to say, “Don’t mourn, organize!”
Now, imagine if, next year, a Sanders Un-Christian Coalition, made up of 8 million voters, announced that it will throw its endorsement to the Green Party in the midterms if a President Clinton suddenly decides that the Trans-Pacific trade deal is now acceptable.
Imagine if the future Sanders’ organization could, echoing the Christian Coalition’s takeover of the GOP, push progressive Dems over the top in key Congressional races – and mount primaries against those corporatist trogs in the Democratic Party who refuse to re-regulate banks.
To win over Sanders’ voters, Hillary Clinton made an awful lot of promises. Assuming she’s elected, crowds of thousands should dog her every step until she delivers: removing the cap on income tax for social security, opening up Medicare to those 50 to 65 (quickly, please!), cutting student debt to public universities – and restoring the Voting Rights Act though her Court appointees.
If she doesn’t produce, the organization is there to kick the legs out from under the campaigns of the banksters’ Democrat stooges.
Clinton ran a campaign that basically sneered at idealism. It was the vice-principal telling us, “You can’t do that” – you can’t have universal health care, you can’t have low-cost education, you can’t bust up the banks. A permanent coalition of Bernie activists will quickly turn that sneer into fear.
Because if there’s one thing a politician hates more than full disclosure of their donors, it’s an informed, organized, and activated voter. Especially one multiplied by a million. Just ask Reverend Pat.
* * * * * *
Greg Palast (Rolling Stone, Guardian, BBC) is the author of The New York Times bestseller, The Best Democracy Money Can Buy and Billionaires & Ballot Bandits, which will be released as a feature documentary movie this fall. Get your name in the movie credits! The Deadline has been extended to the 30th of July 2016.
Check for Movie Screenings in your area.
Subscribe to Palast’s mailing list and Podcast to receive regular updates on this issue.
Visit the Palast Investigative Fund store or simply make a tax-deductible contribution to keep our work alive!
Or support the The Palast Investigative Fund (a project of The Sustainable Markets Foundation) by shopping with Amazon Smile.
GregPalast.com