Some vultures have feathers, but some have fancy offices and huge homes. Tonight, BBC investigative reporter Greg Palast follows the trail of one “vulture fund” chief, from a locked office door in New York to mud-brick houses in Africa. 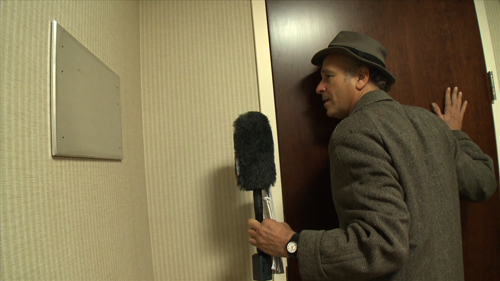 Reporter Greg Palast outside the office of New York vulture fund. The name plaque has been removed and the staff locked inside.

How strange. When I arrive at the offices of Eric Hermann at hedge fund FH International, just outside New York City, the company’s corporate sign is unbolted from the wall and the suite number removed from the door.
But wait … I hear noises inside the office. Huh? I knock on the locked door and out steps the office building’s security manager.
“Guys, they don’t want to be interviewed. They don’t want to be seen. So we are going to have to ask you to leave the building.”
“And do you know why they took the sign off?”
His reply to our cameras, “I have no clue.”
But we do.
Mr. Hermann is the principle owner of a so-called “vulture fund” which attempted to seize more than $20 million from the war-wounded nation of Liberia.
Mr. Hermann is known in the finance business as a debt “vulture.” He and his associates buy up the debt of the poorest nations on the planet, usually for pennies on the dollar, then sue or use other means to squeeze the nations to pay ten times, even a hundred times, what the vulture fund paid for the debt.
The effect of Hermann’s financial maneuvers earns little applause in Liberia. In that African democracy, diplomat Winston Tubman tells us what he would say to vulture fund operators, “‘Do you know you are causing babies to die all over Liberia?'” 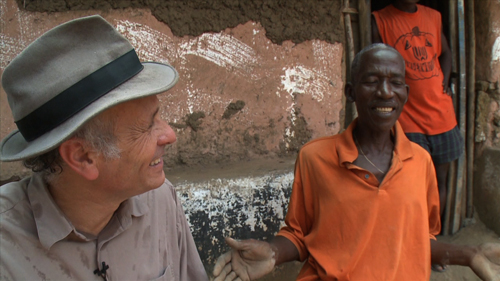 Reporter Palast speaks with T. Bai Flahn, Demeh Village elder.That’s strong language, but in Liberia, we see the effects of the threat of losing over $20 million from this desperately poor nation’s budget. In the village of Demeh, I meet Howa Murvee. During Liberia’s recent civil war, her grandfather was beaten to death in front of her. Every home in the village was destroyed. Now, with money from selling donuts at a rural bus stop, she has raised the $100 needed for materials to rebuild her mud-and-thatch home.

The sums sought by Hermann and the vulture funds equals the cost of rebuilding a quarter million homes for displaced war refugees like Howa.
Back in New York, I located court documents which show that Hermann and associates sued Liberia for nearly $20 million for the debts which cost Hermann’s firms a fraction of that sum. Hermann sued in February 2002, Liberia’s capital had neither electricity nor water. It was under siege from warlords and under UN sanctions and had no functioning government. Not surprisingly, Liberia failed to appear in court and lost automatically. The poor nation was ordered to pay Hermann and associates the millions he demanded.
Hans Humes, CEO of Greylock Capital, a major player in the foreign debt speculation business, was willing to speak to us about how the industry operates. At his Park Avenue, New York, office, he explains how his own firm got hold of Liberia’s debt, dirt cheap during the civil war: 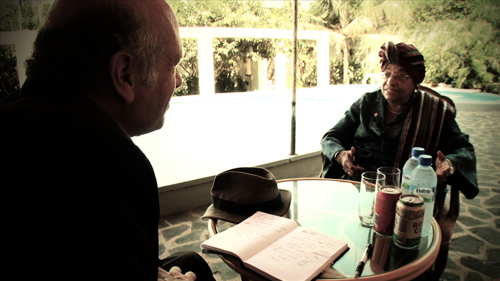 “I ended up buying a lot of the loans that we had in Liberia. When I called one of the banks that was going through a merger 13,14 years ago, I said, “Hey, by the way, you’re a lender to this African country.’ And the guy said, ‘No I’m not; and a couple days later he said, ‘You know what, you’re right. We found this box in this warehouse that had files for all these loans. Do you want to buy all of them?'”
But Humes is no “vulture.” When peace and democracy came to Liberia, he accepted Liberia’s offer of 3 cents on the dollar for the debt the nation owed. So did every other creditor — except for Hermann and associates. In the middle of the negotiations with Liberia, Hermann transferred a portion of his Liberia holdings to a hedge fund called “Hamsah.”
Hermann’s firm would have received only $1 million under the 3-cent deal accepted by Humes and others. But this firm called “Hamsah” and associates ended up across the Atlantic, suing Liberia in a London court for $28 million.
Humes is infuriated by such manipulation. Without naming Hermann nor Hamsah, he says, “All they’re trying to do is to exploit the system, hold the system hostage, to get some sort of excessive returns.”
Nor was the President of Liberia too pleased with this new legal attack by the vultures. At her home in the capital, she has a message for the vulture funds. President Ellen Johnson Sirleaf is Africa’s first elected female head of state. She pleaded with the vulture fund, “Here’s a country having two decades of turmoil, death and destruction, trying to find its way back trying to give its young people a future. You should not be the one to become an obstacle. Have a conscience and give this country a break.”
The British Parliament heard her. Last Friday, the day after our London broadcast, Parliament voted to bar vulture funds, like Hamsah, from using the British courts.
President Sirleaf is thrilled by Britain’s swift action. “Bravo! We’ve been waiting for a parliament or an assembly to take this kind of hard decision to be able to bring these funds into reason.”
Now she is asking America to act on similar legislation before the US Congress. “Maybe the US Congress … will pick up this gauntlet and will follow the example of Britain and move that — because it’s just so unfair to poor countries.”
********
See the full report on BBC World News America TONIGHT. BBC World News America is broadcast every weekday at 1900 ET / 1600 PT and again at 2200 ET / 1900 PT on BBC America, a digital cable and satellite TV channel available in more than 65m US homes.
Sign up for Palast’s investigative reports at www.GregPalast.com and subscribe to his podcast here.