[Nov 6, 2022: Atlanta, GA] Let me break the bad news: Absentee ballots voted in Georgia have PLUNGED by A MILLION VOTES — from 1.2 million just before the 2020 election to a paltry 0.2 million, an 83% drop. Why? Because under Gov. Brian Kemp’s new law SB202, mail-in balloting has become insanely difficult, requiring enclosing an ID. And he’s shuttered every absentee drop box except during early polling hours — and all drop boxes are locked in offices. NONE are functioning now.

As one elections official told me on condition of anonymity, while in-person Election Day voting could rise, it’s just not going to get close to the number of voters — overwhelmingly Democrats — who lost their right to vote by mail.

The poster for our film, Vigilante: Georgia’s Vote Suppression Hitman, is a ballot drop box shot full of holes by Kemp’s operators. Unfortunately, our warning is becoming too true.

The Palast Investigative Fund have made Vigilante: Georgia’s Vote Suppression Hitman available to stream for FREE for a limited time at: 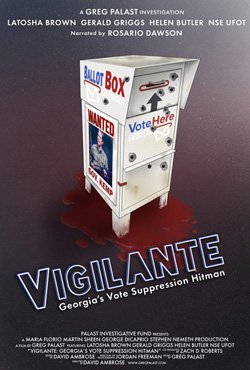 The film is produced by Academy Award-winner Maria Florio, with executive producers Martin Sheen, George DiCaprio and Stephen Nemeth, and was directed by David Ambrose, who previously worked with Palast on the film The Best Democracy Money Can Buy.

Support our work by donating for a signed DVD of the film.

Or make a simple donation no matter how large or small to help us get the word out!

Join us this morning with my friend @RevDrBarber for the Moral Call to Vote in Columbus, Ga. #NAACP #justicefighter

Join us today for our Souls to the Polls rally! Special guests @RevDrBarber @yannasoulsings @Dee1music and many more! Today is the first snd only Sunday for early voting in the U.S. senate race! Let’s make history Georgia. @BlackVotersMtr #WeWontBlackDown 👊🏾❤️🙏🏾🙏🏾🙏🏾