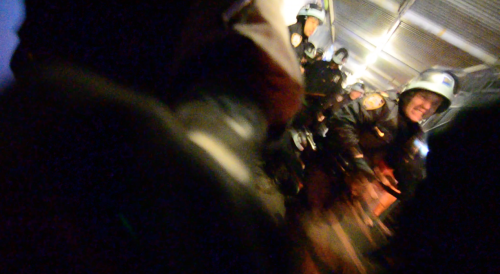 So big deal. They evicted us.  That just means we are among five million Americans evicted from their homes this year.
Our photographer, Zach Roberts, had his camera cracked and his head whacked. [See the photo of the nightstick just before it breaks the lens.]
Go ahead, kick us and evict us. That won’t stop us. Because it’s not about the real estate. Wall Street’s just an address.
Time to remind The One Percent why we occupy.

We occupy for Stanlee Ann Mattingly.
Mattingly, an Osage Indian, saw a tanker truck poaching oil from the reservation stripper wells.  Our investigators tracked the truck back to a man on a platform exhorting his company truckers to steal more of the Osage’s oil.  The man is named Charles Koch.
And that is why we occupy.
We occupy for Jason  Anderson.
Anderson worked on BP’s Deepwater Horizon rig.  Through bribery and beatings, BP concealed this fact: two years before the Deepwater exploded, another BP well blew out in Central Asia and BP execs withheld the info from the US Congress to get the Gulf drilling permit.  If BP hadn’t lied, Anderson would not have been incinerated.
The Deepwater Horizon wasn’t an accident. It was a homicide.
And that is why we occupy.
We occupy for Robert Pratt.
Pratt, a United Auto Workers member in Detroit, has a mortgage payment that tripled because of a sub-prime mortgage scam by Bank of America’s Countrywide unit.  Countrywide’s CEO got a half billion dollar bonus, Bank of America got a $10 billion bail-out from taxpayers and Pratt, with five kids, got a foreclosure notice.
And that is why we occupy.
We occupy for Janessa Greig. 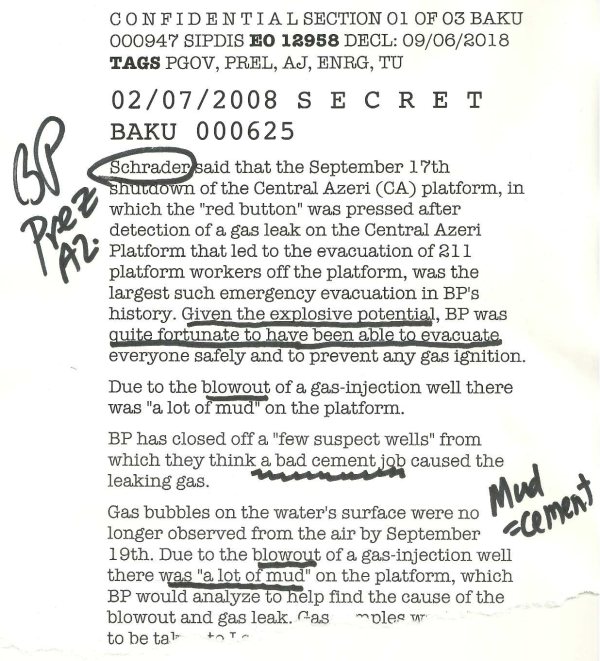 Greig, 13-years old, and her mom, Jacqueline, were burnt to death when a gas pipeline exploded under their home in San Bruno, California.  Our investigation reveals that “PIGs,” pipeline inspection robots, were deliberately mis-programmed to under-report dangerous pipeline cracks …all so gas and oil companies can save a couple bucks on repairs.  The Greigs died because pipeline companies lied.  And now the PIG-jackers want to build a new pipeline from Canada to Houston.
And that is why we occupy.
We occupy for Vaggelis Petrakis.
For a decade, Goldman Sachs worked a scheme with Greek politicians to manipulate currency reserves to hide big deficits.  The fraud netted Goldman a secret fee of over a quarter billion dollars; and netted the Greek people, when the scam blew up, a destroyed economy and a debt to Goldman and cronies of $14,000 per year per family.  When the debts bankrupted fruit-seller Petrakis, he committed suicide.
And that is why we occupy.
We occupy for our nation and our kids and this wounded planet.
It’s not about the real estate, the tents or tarps.
It’s about Them, the 1%, and Us, the 99%.
THEY get homes bigger than Disneyland, WE get foreclosure notices.
THEY get private jets to private islands, WE get tar balls and lost futures, and pay their gambling debts with our pensions.
THEY get the third trophy wife and a tax break, WE get sub-primed.
THEY get two candidates on the ballot and WE are told to choose.
THEY get the gold mine, WE get the shaft.
And that is why we occupy.
****
These investigative findings, the evidence and the story of the cover-ups of the evidence are all contained in Vultures’ Picnic, an investigation of The One Percent, Greg Palast’s new book, released this week.   Go to VulturesPicnic.org to download the first chapter.
Palast’s investigation of finance vultures is featured on the front page of today’s Guardian (London) and tonight on BBC Television Newsnight.
A report from Congo, Bosnia and New York.
– UK urged to prevent vulture funds preying on world’s poorest countries
– Vultures feed when economies are turned into rotting carcasses