[Thursday October 7, 2021] Today, Congress finally subpoenaed Ali Alexander, whom our investigation exposed as the instigator of the illegal January 6 march on the capitol. We had, on January 8 also disclosed that the Georgia Republican Party had officially sponsored Alexander despite his threats of violence if Trump were not declared re-elected.

The Select Committee to Investigative the January 6th Attack on the United State Capitol filed subpoenas targeting Ali Alexander and his group, Stop the Steal LLC. Nathan Martin, an organizer with Stop the Steal, was subpoenaed along with Alexander, the group’s founder.

Alexander claims he organized rallies with permits on January 5 and 6, but was not involved in the attack on the Capitol. However, evidence obtained by the Palast Investigative Fund revealed that Alexander led the march from the rally at the Ellipse, at which President Trump spoke, that led to the Capitol riot, though both Alexander (and Trump) were informed the march was dangerous and illegal.

Alexander’s testimony could be a landmine for the Republican Congressmen who joined him in planning Stop the Steal events, Rep. Paul Gosar (R-AZ), Rep. Andy Biggs (R-AZ) and Rep. Mo Brooks (R-AL)

For the Palast investigations team, I covered several of Alexander’s rallies in Georgia in 2020. At one rally across the street from the Georgia Governor’s mansion, Alexander gave an impassioned speech where, on November 19, 2020, he declared that “Either they take Trump, prove that they won or they’re not going to hand them back the country again. We’ll light the whole sh*t on fire!” 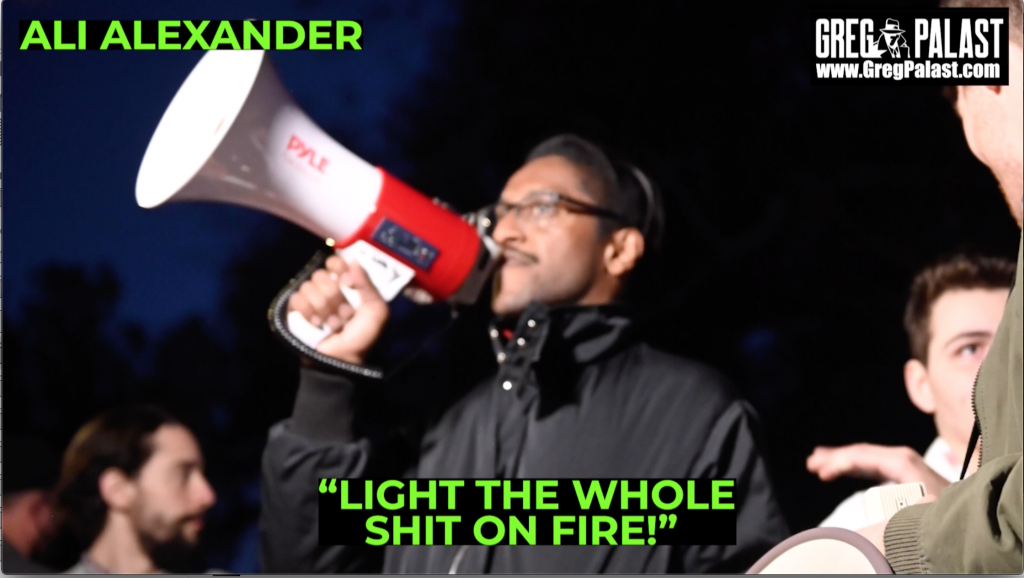 Ali Alexander, speaking to his Stop The Steal followers at a rally in Georgia: “We’ll light the whole sh*t on fire!”

The founder of Stop the Steal was joined by right-wing Christian supremacist Nick Fuentes and nativist broadcaster Alex Jones. Days later, I discovered that Alexander was at that time working with the Georgia Republican Party and the National Republican Senatorial Committee on a get-out-the-vote campaign in the high stakes run-offs for Georgia’s US Senate seats.

Alexander brought in other Stop the Steal organizers into meetings with the door knockers, including Brandon Straka who, just today, agreed to a plea deal for his part in the January 6th riots.

Alexander and Martin have until October 21 to produce the requested documents and will be compelled to appear for a deposition on October 29.

Alexander has been on the run or at least in hiding for the last couple of months only making posts on his Telegram.

Ali Alexander and his compatriot, Brandan Straka were also both named in a lawsuit brought by the Capitol Police harmed by the January 6 riot. According to Damon Hewitt, President and Executive Director of the Lawyers’ Committee for Civil Rights Under Law, “As this lawsuit makes clear, the January 6 insurrection was not just an attack on individuals, but an attack on democracy itself. It was a blatant attempt to stifle the votes and voices of millions of Americans, particularly Black voters.”

In the suit, Alexander, along with other defendants, are accused of “violat[ing] two provisions of the federal Ku Klux Klan Act, which forbids conspiracies to use force, intimidation, and threats to prevent federal officers from doing their jobs or to injure them in the course of their work.”

While this lawsuit may not have them see jail time, it could result in financial ruin for Stop the Steal, its founder Alexander, and the other extremist organizations.