Roger Stone and Alex Jones, key planners of the January 6 Stop the Steal rally and illegal march that led to the deadly storming of the US Capitol, have been subpoenaed by the US Congressional committee investigating the attack. 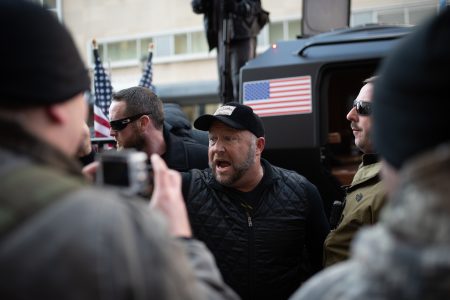 Alex Jones, surrounded by security, is seen stepping out of his ‘tank’ to meet his fans at a 2020 2nd Amendment rally in Richmond, Virginia. Photo: © Zach D. Roberts, 2020.

At the heart of the Jones subpoena is the broadcast on his show Infowars, in which a guest host told Jones’ audience to go to Washington and, “if necessary, storming right into the Capitol…. If you have enough people, you can push down any kind of fence or wall” — which happened, leading to deaths.

The Committee seeks details on his astonishing statement that the White House itself asked him and Ali Alexander to lead a march to the Capitol from the Ellipse where President Trump spoke to a rally of supporters. The Palast Investigative Fund has previously reported that the organizers of the march sent urgent messages to the White House and Alexander that such a march would violate the rally permit and would be dangerous.

We earlier revealed panic text messages between the organizers of the January 6 rally, described by an insider:

“Ali was running amok in the VIP section — it was disgusting — saying we’re going to go to the Capitol. What the f***! We’re not doing a march to the Capitol! What a terrible idea to try to move that number of people all the way to the Capitol.”

The Committee is seeking information on the extent to which Trump himself was aware of, and planned, the illegal march.

Jones, who featured Stone, Alexander and President Trump on his broadcast, is facing financial ruin over last week’s court judgment for his defamation of the parents of the children gunned down in Sandy Hook, Connecticut. Jones accused the families of faking their children’s deaths, claims which led to  threats to their families’ safety.