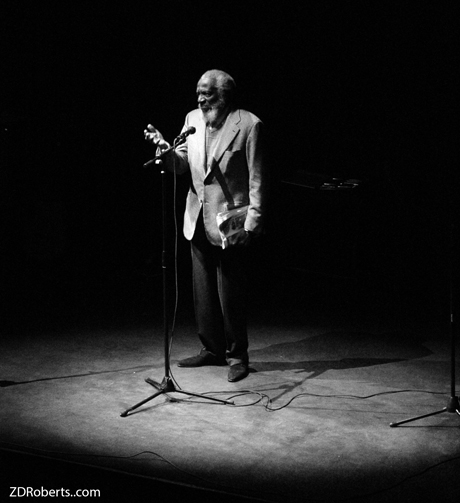 Photo of Dick Gregory by Zach D Roberts.
Dick Gregory was a HUGE influence on my work and writings – that ability to take the darkest side of America and destroy the killers and Klansman with the deadly bullet of humor. Even while wilting from hunger (he would eat no solid food until the US left Vietnam). I memorized his speeches. He asked MLK III to introduce us so he could help promote The Best Democracy Money Can Buy – and I asked him to forgive me for his material that I plagiarized in our common cause. Alev ha-shalom, Brother Greg.

***
Before turning to journalism as an investigative reporter for The Guardian and BBC Television, Greg Palast was an investigator of fraud and racketeering for governments and labor unions worldwide. His investigations have appeared in Rolling Stone, Harper’s and New Statesman. Known as the reporter who exposed how Katherine Harris and Jeb Bush purged thousands of Black voters from Florida rolls to steal the 2000 election for George Bush. Palast has written four New York Times bestsellers, including Armed Madhouse, Billionaires & Ballot Bandits, and The Best Democracy Money Can Buy, now a non-fiction movie.

Stay informed, download the new, #TrumpStoleIt, post-election edition of our hit film, The Best Democracy Money Can Buy, or get the signed DVD, a signed copy of the companion book – or better still, get the Book & DVD combo.

This is why I check my registration every 2 weeks. I'm 34, so I'mjust part of the group of people they wish to suppress the most. If you live in Ohio, as I know some of my people do, keep checking. Advise your friends to check. Meddling is real, it's just not foreign. https://twitter.com/Greg_Palast/status/1220452260112752653