In 2016, Congressman Hastings called me. 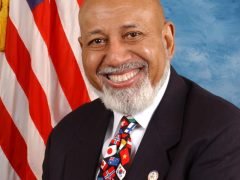 He’d given Attorney General Loretta Lynch a copy of my Rolling Stone exposé of the Jim Crow “Interstate Crosscheck” voter purge program. But he wasn’t fooling around: Despite pushing 80, he walked across the Potomac bridge to the Justice Department to put it directly into Lynch’s hands. He said, if he mailed or emailed or sent a messenger, “She could tell me she never got it.” In a way, Obama’s AG didn’t get it: that is, never did a damn thing about it. But Alcee never dropped it — pushing for what is now HR 1.

That year, voting rights legend Hank Sanders took me over the Pettus Bridge in Selma, saying, “We have to cross this bridge again and again, because the fight for our vote is never over.”

Whether it’s the Alabama River, the Potomac, or the rivers of bullshit and nullification that stand between us and our rights, there are “many rivers to cross.” And no one, as Hastings insisted, can cross for us.