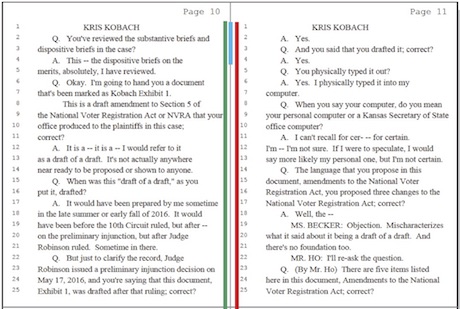 [Pages 10 and 11 of Kris Kobach’s deposition  see the full redacted deposition here.]
Kansas Secretary of State Kris Kobach blocked ONE IN SEVEN Kansans from registering to vote because they could not provide passports or certified birth certificates. Almost all those blocked were new young voters and older poor voters i.e. Democrats.
Kobach could not identify a single one of these as a non-citizen.
This blockade of mostly Democratic voters is justified by Kobach’s (and Donald Trump’s) claim that the number of non-citizen voters he found (5 over twenty years out of a BILLION ballots cast), is just the “tip of the iceberg.”
Dale Ho of the ACLU ended his closing argument: “The iceberg, on close inspection, your honor, is more of an ice cube.” 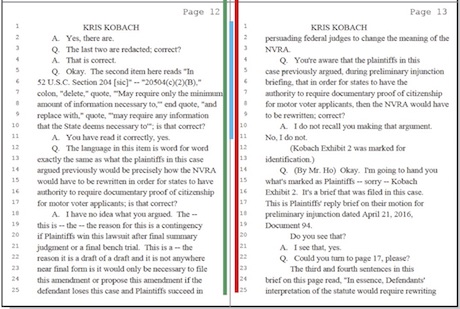 [Pages 12 and 13 of Kris Kobach’s deposition see the full redacted deposition here.]
The ACLU also released a copy of Kris Kobach’s deposition in which he confesses that, as the Palast team charged in January 2017, that he proposed to Trump a scheme to change the National Voter Registration Act to allow this Kansas passport-or-birth certificate rule to become national law. That would, our experts calculate, cost nearly one million new voters to lose their vote by the 2020 Presidential election.
Become A Kobach Litigation Supporter

Help us fund our mass litigation operation against Kris Kobach (Trump’s Vote-Thief-in-Chief). For now, details must remain confidential.
Click here to make a tax-deductible donation.
* * * * *
Greg Palast has written four New York Times bestsellers, including Armed Madhouse, Billionaires & Ballot Bandits, and The Best Democracy Money Can Buy, now a major non-fiction movie, available on Amazon and can be streamed for FREE by Prime members!
Stay informed, get the signed DVD of the updated, post-election edition of The Best Democracy Money Can Buy: The Case of The Stolen Election, a signed copy of the companion book or better still, get the Book & DVD combo.
Support The Palast Investigative Fund  and keep our work alive!  Become a monthly contributor and automatically receive Palast’s new films and books when they’re released!
Or support us by shopping with Amazon Smile. AmazonSmile will donate 0.5% of your purchases to the Sustainable Markets Foundation for the benefit of The Palast Investigative Fund and you get a tax-deduction! More info .
Subscribe to Palast’s Newsletter or his separate list for Poems & Stories.
Follow Palast on Facebook, Instagram, and Twitter.
GregPalast.com