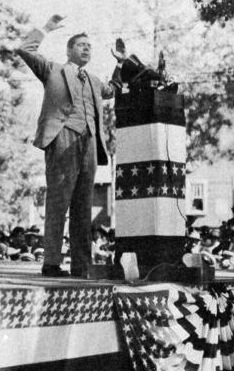 Then, as the Mississippi waters rose, one politician, the state’s electricity regulator, stood up on the back of a flatbed truck rigged with loudspeakers, and said, roughly, “Listen up! They’re lying! The President’s lying! The rich fat jackals that are drowning you will do it again and again and again. They lead you into imperialist wars for profit, they take away your schools and your hope, and when you complain, they blame Blacks and Jews and immigrants. Then they drown your kids. I say, Kick’m in the ass and take your share of the wealth you created.” Huey Long was our Hugo ChÃ¡vez, and he laid out a plan: a progressive income tax, real money for education, public works to rebuild Louisiana and America, Social Security old age pensions, veterans’ benefits, regulation of the big utility holding companies, an end to what he called, “rich men’s wars,” and an end to the financial royalism of the One Percent.
He even had the audacity to suggest that the poor’s votes should count, calling for the end to the poll tax four decades before Martin Luther King succeeded in ending it. Long recorded his motto as a musical anthem: “Everyman a King.”
The waters receded, the anger did not, and, in 1928, Huey “Kingfish” Long was elected Governor of Louisiana. At the time, Louisiana schools were free, but not the textbooks. The elite liked it that way, but Long didn’t. To pay for the books, the Kingfish levied a special tax on Big Oil. But the oil companies refused to pay for the textbooks. Governor Long then ordered the National Guard to seize the oil fields in the Delta.
It was Huey Long who established the principle that a government of the people must protect the people, school them, build the infrastructure, regulate industry and share the nation’s wealth-and that meant facing down “the concentrations of monopoly power” of the corporate aristocracy-“the thieves of Wall Street,” as he called them.
In other words, Huey Long founded the modern Democratic Party. FDR and the party establishment, scared witless of Long’s ineluctable march to the White House, adopted his program, albeit diluted, called it the New Deal and later the New Frontier and the Great Society. America and the party prospered. What happened to the Kingfish? As with ChÃ¡vez, the oil industry and local oligarchs had few options for responding to Governor Long’s populist appeal and the success of his egalitarian economic program. On September 8, 1935, Huey Long, by then a U.S. Senator, was shot dead. He was 42.
And now is the moment, as it was in ’27.