It’s official: 1,913,369 ballots were cast but never counted in the 2016 presidential race. That’s from the US Elections Assistance Commission. 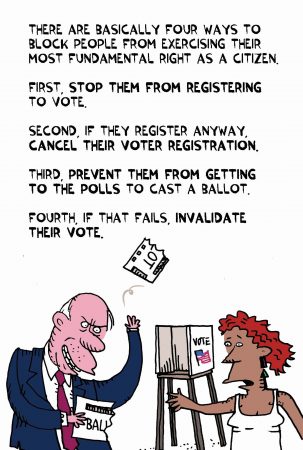 And not just anyone’s ballot gets tossed into the electoral dumpster. The US Civil Rights Commission took a look at Florida’s throw-away pile and calculated that your chance of having your vote simply go uncounted, “spoiled,” is 900% higher if you’re Black than if you’re white.

Trump’s call for an army of 50,000 vigilantes is laughable: some schmuck in a Hawaiian shirt and MAGA cap won’t scare off voters of color. But 50,000 challengers, challenging every single ballot for Biden — that could succeed. It did for Trump in Michigan in 2016. Here’s how Michigan — and so the Presidency, was stolen four years ago.

As mail-in ballots are far easier to challenge than in-person votes, Trump’s trolls could pull off another “win” by challenging even more than the 2 million successfully blocked in the last election.

Here’s what you don’t know: 75,355 ballots were never counted. That’s official, too. Just “spoilage,” that is, ballots that were, for some technical reason, untallied.

But not just anyone’s vote “spoiled.” Most of these vanished votes were cast in Detroit — where only one in ten city residents are white. Motown. Not exactly Trump-ville.

Friends:  we got so close to the Times bestseller list. We had the sales, but not enough from some bookstores…because they’d sold out!  Go figure.  We really need to hit the list this week—and get out our warning.

So, we’ve been able to once again say that if you get the book, we will email you the audiobook for free but only through this Saturday. Just email us proof of your order.

Please tell all your friends and get the word out!.
Go to Amazon, Barnes & Noble or Bookshop right now…

Your response has been heartening to our team as we prepare litigation in several states to force them to give up their secret purge lists.

Exit polls showed Clinton won Michigan. And now the pollsters were apologizing for their “mistake.”

I didn’t buy it. If you counted those ballots in the dumpsters in Detroit, Clinton would have won. And if this pattern held in the other two states’ exit polls that reported she won, Wisconsin and Pennsylvania, Clinton should have won the Electoral College.

I’m not sure what’s wrong with me. The election was over. Hillary and hubby had moved on to lucrative book contracts, six-figure speaking gigs and their “charity.” Trump was triumphant and the country, too, had moved on.

But it bothered me, the 75,355 ballots no one counted in Michigan.

The usual outlets for my investigations, like Rolling Stone, weren’t bothered either. They had “moved on” too. So I borrowed a few more bucks from my pension plan, begged my readers for some spare change, and bought a ticket for Detroit.

To do this investigation, I needed a break. And I got it: a surprise call from Jill Stein. The Green Party Presidential candidate. She offered me a scoop. Stein was ready to raise $9 million for re-counts in Wisconsin, Pennsylvania and Michigan to prove that Trump lost — that is, if you counted all the votes in those states. She could literally overturn Trump’s election.

I broke the story, she raised the $9 million in days, and the recount began.

But “recount” is the wrong word. In Michigan, the funds were meant for counting those 75,355 ballots that were never counted in the first place.

In Michigan, you vote on paper ballots — which you shove into a scanner to get counted. But a funny thing happened in Detroit: 87 machines broke down, they could not read the ballots. Once in Detroit, I met with information specialist Carlos Garcia. He told me his precinct’s scanner was already busted when he arrived at the opening of voting at 7 a.m. It was finally fixed at 9:30 a.m. He stayed and saw that those ballots cast during the morning vote rush, while the machine was broken, were never run through the scanner, never recorded.

That non-count was repeated throughout the city. It was easy to catch… because the number of ballots in the broken machines did not match the total of ballots these machines said it counted. But — ready for this? — the Republican Attorney General ruled that if the number of physical ballots did not match the scanner count, these precincts could not be re-counted. Get that? The precincts with the missing count — the ones you’d want to review — were barred from the re-count. 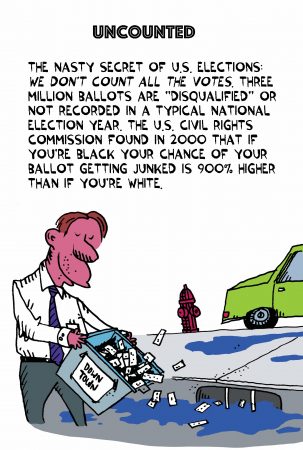 Occupied Territories
One f’d-up machine in a precinct is bad luck. No big deal. But 87 broken machines, 87 machines not counting thousands of ballots, is a very big deal, an electoral crime wave. A stolen election.

And they knew it. Republican state officials knew before Election Day that Detroit’s scanning machines were already busted, dysfunctional or likely not to survive the day. Well before November 2016, the Detroit City Clerk Janice Winfrey pleaded to fund her budget to replace the bad ballot scanners. But there was a problem: Detroit was bankrupt — and every penny spent had to be approved by “managers,” overlords appointed by the Republican Governor Rick Snyder.

In 2016, Detroit was an Occupied Territory, as was Flint, Michigan. In Flint, the State-appointed managers cut the budget for the water system — and poisoned Flint’s kids with lead. The stories of Detroit scanners and the Flint water supply go together. If you’re going to poison someone’s children, you’d better take away their right to vote against the poisoning.

The Michigan ballot count was Jim Crow’d by bad scanners, and Trump was triumphant. But Jill Stein was going to spoil the celebration. Her recount would pay for an extraordinary machine that could read those uncounted ballots: the human eyeball.

But something funny was happening at the government re-count centers.

Whistleblower
Late November in Michigan sucks. From a Hampton Inn on a truck route north of the city, it was a long slog through dirty slush and wet snow to meet a whistleblower at a roadhouse bar, and a couple stiff drinks to get her to loosen up, to talk without a stutter or fear on camera. “Sue” told me she faced retribution in her white suburb, even from in-laws who were not happy about her blowing the whistle.

Sue is a computer programmer who thought it would be interesting, and just a good thing to do, to volunteer for the recount operation at the county building. She didn’t even have a strong preference in the election.

What she experienced disturbed her enormously:

We saw a lot of ballots that weren’t originally counted because those don’t scan into the machine.

Ballot reviewers were adding previously uncounted ballots to the Clinton column; and Trump operatives were challenging every Clinton vote and every decision for Clinton. They are creating chaos and slowing up the process, and making up nonsense rules to disqualify ballots. At the same time, the Democratic Party had brought in “observers” [who] refused to take part in the ballot count nor even bother to get in the way of the GOP obstructers.

Despite all the obstruction, it was clear that if the count went ahead unimpeded, Trump would lose Michigan. So Trump did the only thing he could do: stop the count.

…Get the rest of the story… in How Trump Stole 2020. And learn how to steal it back.

Get it today from your local book store,  Amazon, Barnes & Noble or Bookshop